The kanji – saké 酒 – is defined as a liquor or alcoholic drink. The Japanese name for what Americans (and much of the rest of the world) refer to as saké is nihonshu, which translates as Alcohol of Japan. Much like wine, Japan’s national drink is incredibly varied, offering a broad spectrum of unique flavors and textures. All sakés are fermented from four ingredients: water, rice, yeast, and mold. Saké’s remarkable range of flavor profiles is dependent on the quality of ingredients and the skill of the brewmaster.

There is a day in Japan that is recognized (perhaps not officially) as saké day. October 1st was declared as nihonshu no hi in 1978 by the Japan Saké Brewers’ Association. It is now celebrated here in the USA and other parts of the world as well. Many breweries begin brewing before or after that day, but that day is undoubtedly a sign that the brewing season has begun.

Rice is at the heart of the saké brewing process. After removal of the hull, the brown rice grain is run through a rice-polishing machine that polishes away the outer portion of the grain, which contains bran, lipids, fats, and proteins that can impart bitter, undesirable flavors and aromas to the saké. The degree to which the grain is polished down has a significant effect on the resulting saké’s taste and quality. The further one mills, the closer one gets to the concentrated starch in the center: the very essence of the saké. Saké made with unpolished rice has a comparatively deeper, richer taste, giving the impression of a strongly flavored saké that often has a noticeable aroma of rice. However, when saké is made using more highly milled rice, the aroma is bright, with a flavor that leaves a light, clear impression. This is why the more highly milled ginjō and daiginjō sakés, with rice-milling rates of 50% and 60% respectively or less, have such a clear, ethereal taste.

Once polished, the rice is washed for approximately ten minutes and then steamed for about fifty minutes. The exact washing and steaming times are calculated based on the type of rice, degree of polishing, humidity, temperature, and other factors. Thereafter, in a specially heated room with high humidity (the kōji room), the steamed and cooled rice is spread out on tables, and spores of aspergillus oryzae mold are sprinkled on top. This mold breaks down the complex carbohydrates into their component sugars. The complete kōji-making process, including cooling, takes more than forty hours. Then, the kōji (steamed rice inoculated with the mold) is transferred to either a yeast starter or a fermentation tank.

Water and yeast are added to the yeast starter tank. The yeast propagates for fourteen days, and the starter is then moved to a larger fermentation tank where more rice, kōji, and water are added. The mash then ferments for approximately twenty-eight days. During this time, the yeast consumes the sugars in the rice and kōji, producing alcohol and aromatic compounds, introducing the components that eventually lend each saké its complexity and distinctiveness.

Following fermentation, the mash is pressed to remove the solids. After pressing, most sakés are pasteurized and filtered before they are matured in tanks. In some cases, water is added before the saké is bottled. However, the saké world is full of variety: some brewers specialize in or make unpasteurized, roughly filtered, and cask-strength saké, to name just a few. In many cases, brewers also fortify the saké with alcohol to enhance aromas and flavors.

Throughout the process, nothing is wasted. Byproducts are used as pillow fillings, fertilizer, and cattle feed, as well as shōchū, sweets, and rice crackers. Most notably, however, the polished-off rice grain powder and saké lees are essential ingredients for the country’s vast food pickling industry.

A small note regarding the kanji that many readers recognize as saké – 酒: there are several alternative pronunciations, readings that we would like to share with you as your journey towards saké enlightenment begins. Here are a few examples:

The water is a very important component in the making of saké because 80% of the end product is composed of it. The quality of the water can dramatically affect the flavor of saké. Water to be used for saké-making should be good to drink, containing the proper balance of minerals such as potassium and magnesium as well as phosphoric acid. These components are optimal for the development and fermentation of the kōji (steamed rice that has been inoculated with mold) and yeast. The water in the archipelago of Japan is on the softer side; soft water has a low mineral content and allows for the creation of light and clear saké. On the other hand, hard water has a high mineral content and one of the more undesirable components sometimes found in hard water is iron. Compared to much of the water around the world, Japan’s water is better for the fermentation of saké. Wine does not require the addition of water, but beer, like saké, does.

The rice is ideally used in premium saké-making the Japanese refer to as shuzō kōtekimai or sakamai. There are many (over 100) varieties of sakamai; Yamadanishiki and Gohyakumangoku are two of the most famous. The general characteristics of sakamai differ slightly from ordinary rice that we usually eat; the grain is larger and it has a white center part called shinpaku where much of the starch is concentrated. Each type of sakamai has its own character and its own distinctive flavor. Wine (as Europeans know it) comes mainly, almost exclusively, from grapes. Beer can use a variety of other grains, rice being one of them. Saké is 100% rice based.

The mold (aspergillus oryzae) is required to break down the complex carbohydrates within the grain of rice into their component sugars. Without this step, the yeast would not be able to do their job of producing alcohol. This component (the Aspergillus orzae) does not need to be added in wine-making or in beer-making.

The yeast (saccharomyces cerevisiae) is the species of yeast used in making saké, wine, and beer. Different strains, however, are used that are ideally suited for each beverage. The job of the yeast is to break down the sugar and produce alcohol, carbon dioxide, and a whole host of organic compounds like amino acids and other aromatics, esters, acids, etc. that are a by-product of fermentation. Even within the species Saccharomyces cerevisiae, there are numerous different strains of yeasts used in the production of saké. One of the most famous is kyōkai #7. Each strain of yeast yields variance in terms of flavor, aroma, body, etc. to the saké. Each year new strains are developed as brewers look to improve or create new saké. 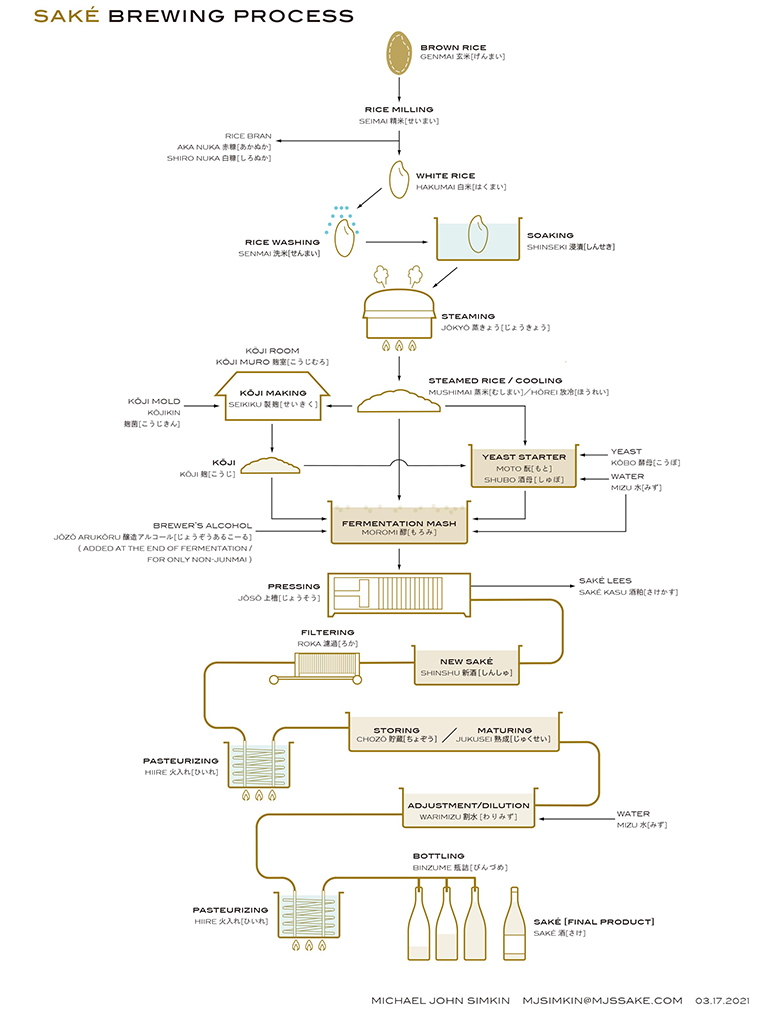 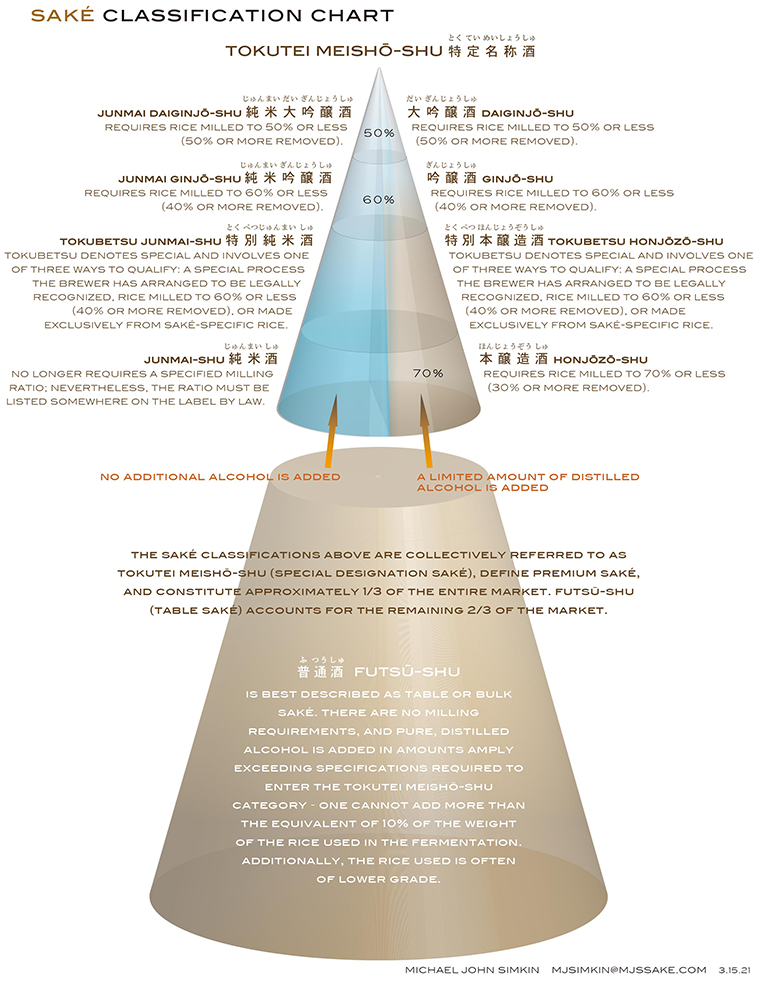