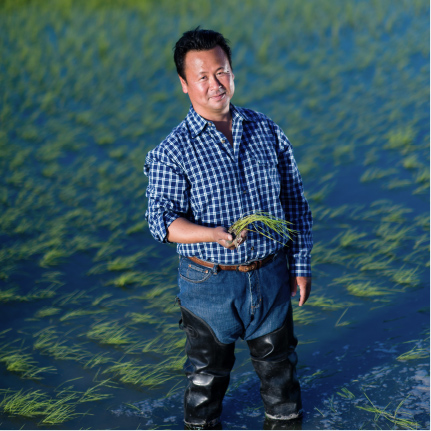 Ross Koda was raised at Koda Farms (est. 1928) in South Dos Palos, California. From an early age, he developed an awe of and an appreciation for nature, observing tadpoles transforming into frogs in the rice fields and caterpillars metamorphosing into Monarch butterflies. Growing rice and its related activities became an integral part of his daily life. He grasped the need for managing the processes into a cohesive and efficient whole: from rice cultivation and irrigation to harvesting, milling and packaging.

After earning degrees from Stanford University, BA Economics, and U.C. Davis, MBA, Ross resumed working as a member of the third generation in the family business. To gain experience outside that business, he worked four years at the Chicago Mercantile Exchange and Chicago Board of Trade for independent day traders and eventually began trading on his own. Working in high-pressure situations taught him about his own capacity for taking risks and enduring stress. In 1998, he returned to the farm convinced that rice farming and milling would be his life’s work.

In 2004, Ross was instrumental in launching the organic rice program. This entailed modifying conventional rice cultivation and processing to organic methods without the use of commercially made fertilizers and pesticides, maintaining separation of organic processes, elevating food safety training, and ensuring traceability from seed to store shelf.

The Koda Farms documentary film “Seed” opened in 2015 and introduced Ross to Mr Masanori “Masa” Baba, the director. On the wave of widespread praise for the film, in 2016, Ross had the privilege of accepting on behalf of Koda Farms an award from the Emperor of Japan for its history of the pursuit of excellence in agriculture.

Seeking novel uses for the farm’s rice has been a life-long pursuit, and this quest found inspiration in sake. His exporting organic rice engendered a new-found appreciation for Japan’s most famous beverage and literally planted the seed of making sake from Koda Farms’ organic rice. 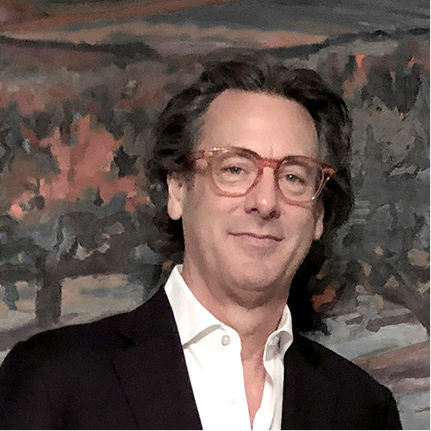 Michael John Simkin, through no fault of his own, was born in New York’s Finger Lakes Region, though spiritually and philosophically, he is Japanese at heart. A lifelong thirst, coupled with decades of travel, ignited a passion for Japan’s culture, food and, most important, the “drink of the gods”—saké. Along this journey, Michael pursued a degree in Japanese and East Asian studies at Cornell University and the University of Rochester and interned at Aoki, Asahi and Ichishima breweries.

Michael is a certified Level III saké educator for the Wine & Spirit Education Trust (WSET), an organization for whom he was instrumental in adding saké to the curriculum at the behest of the Niigata Saké Brewers’ Association and Niigata Prefectural Government. His gregarious personality and engaging charisma have landed him on stage at numerous Japan Society locations across the US, a National Geographic conference in the nation’s capital, an American Museum of National History program, and as a frequent anchor speaker for the Society of Wine Educators.

Michael is an oft-quoted saké authority for national print and digital media outlets, including New York Daily News and Los Angeles Business Journal. His vast network of wine and spirit industry professionals and his keenly honed knowledge of the journey from the rice paddy to the world’s finest tables distinguishes Michael as a highly prized saké industry expert. Working as a consultant to foreign wine producers and saké breweries seeking entry to the US market, Michael bridges the gap between businesses in the USA and Japan.

His joining the Omurasaki Beverage Company team as Director of Sales and Marketing during the brand’s genesis is a full-circle moment, capitalizing on Michael’s holistic approach to the philosophy of saké. Working with the team that choreographed the Uka journey from heirloom California organic rice to artisanally crafted junmai daiginjō epitomizes Michael’s lifelong commitment to quality. He is the quintessential ambassador for the brand. 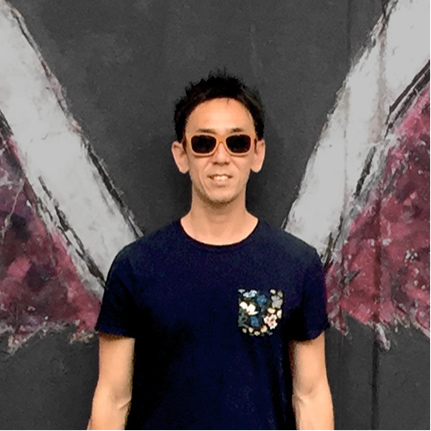 Masa was born in Nagoya, Japan. After graduating from Sophia University in Tokyo with a BA in English and American literature, he decided to fly over the Pacific Ocean and chose Los Angeles as his destination to pursue a filmmaking career. Masa immediately enrolled in the film production program at the University of California’s Los Angeles Extension Program.

After finishing the intensive curriculum, he wrote, produced, and directed his first short film, Chiyo, which was honored as a semi-finalist for the 79th Academy Awards. Masa then worked extensively for Oscar-nominated producers at a prestigious film production company based in Hollywood and South Africa. Several years of the demanding work experience fueled Masa’s determination to immerse himself in the pursuit of becoming an independent filmmaker and artist.

In 2014, Masa directed the Seed documentary about Koda Farms and met Ross Koda. This experience, combined with Masa’s own personal life stories, inspired him to focus on a new subject: real-life stories. This change came in addition to other creative endeavors he’s been developing to this day.

After Ross and “Uncle Hank” christened the new sake, “Uka,” Masa was asked to apply his talents to creating a brand logo. Based in the Sumie style, he created the butterfly image whose artistic and naturalistic style paired perfectly with Uka’s identity as a product with roots in both California and Japan and crafted with dedication and integrity. Rice and sake are sacred and essential foods in Japan. As a first-generation Japanese immigrant and the creative director of Uka sake, Masa appreciates wholeheartedly the opportunity to be involved with the Uka project. 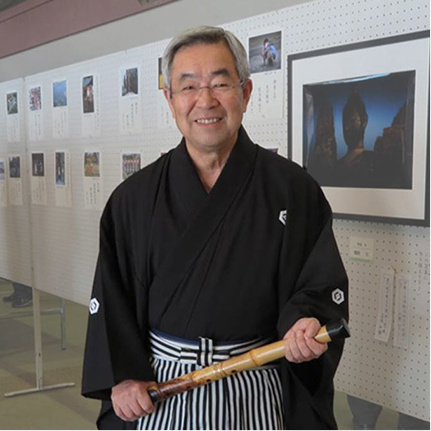 In 1985, Hideo “Hank” Ide pioneered the location, design, and construction of Hitachi Ltd.’s first automotive-related company in the USA. In the ensuing 23 years of managing Hitachi Automotive Products USA, he earned renown for his communications skills with employees, customers, and community leaders. He was also acclaimed for his commitment to innovation, and his personal style of conducting business based on a win-win approach.

While pursuing interests in history, Hank noted his mentor’s father had a close friend who emigrated to the USA from a village near Hank’s hometown in Fukushima. After further research on the emigre, Keisaburo Koda, who founded Koda Farms, he decided to arrange a meeting. Hank visited Koda Farms in 2005 where he met Keisaburo’s son Ed Koda and grandson Ross Koda. Since this initial introduction, the Koda and Ide families have continued their friendship. As the historian of the Koda Family and mentor to Ross, “Uncle Hank” continuously provides invaluable wisdom, experience, and advice.

In 2008, Hank retired from Hitachi USA and returned to Ibaraki, Japan, pursuing higher degrees in Shakuhachi music (bamboo flute), playing various wind instruments in his travelling band, creating memorable photographs accompanied with Haiku, and contributing his skills to projects of interest. In 2015 when the director, Mr Masaonori Baba, shot the Japan segment for the Koda Farms documentary film “Seed,” Uncle Hank became a co-producer by providing crucial historical detail, recommending important shooting locations, and coordinating interviews. In October of 2018, Ross Koda contacted him with the idea of using Koda Farms’ rice to create an organic sake in his grandfather’s home region of Japan. After numerous meetings with different brewers, Uncle Hank found a strong candidate, Ninki Shuzo. Uncle Hank continues to offer his unique abilities and advice on all aspects of Uka Sake’s evolution.